When my father and I sculpt we always discuss in what direction I would like to go and how to accomplish that, during our third year we decided to work on a horses head.  Horses are one of my Father's specialties and I will say his are fabulous.  It was my turn to try to make my horses head look realistic, again I'm stretching as an artist to work on realism rather than my usual illustrative style.  Isn't that what we all strive for, to stretch our artistic wings? 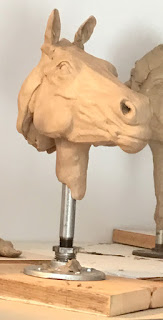 Imagine my surprise when my head actually resembled a horse!  It wasn't gaunt or looked like it was starving, however we still need to get the neck on the horse but that will need to wait for next year as this year we decided to change gears and try our hands at bringing one of my characters to life.  Oh my, what a learning experience for both of us.  Check back for the next installment of my sculpting challenge.
Posted by Christy Hartman at 7:41 PM No comments:

Notice in the title I added a ?  My father is an amazing sculptor, who specializes in western/wildlife art, he has won art competitions and has been in a number of galleries over his career as a bronze artist.  A few years ago I asked him if he would be willing to teach me some of his sculpting techniques and so began our yearly Father/Daughter sculpting week.

It has been a joy for me to spend time with him learning his stock in trade.  I am never going to be as proficient as he is, hence the ? mark in the title, but I do enjoy the process and enjoy the opportunity to learn a new media.  I will admit that I do not do a lot of sculpting the remainder of the year, which also indicates that I will never become as proficient as he is, but for that week that I sculpt with him I am all in and love it.

Our first two years were spent working on a sculpted head, working with an oil based clay and on an armature made out of wire.  When I say the first two years I mean it literally took me that long to develop a head which resembled a head.  The first year the head looked emaciated and gaunt, which was not my plan, the second year we spent the time fleshing out the face and building character.   I did spend a lot of time with my hands in clay, using his tools, so I guess if that is my definition I was "sculpting" and I use that term loosely. 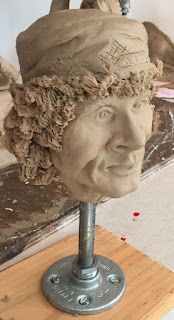 I will say that I really liked my hat and the hair  but I never did get the eyes so I thought they looked the way they should.  For any of you who are familiar with my artwork, my style leans more toward an illustrated look rather than realism so this was a stretch for me.
Posted by Christy Hartman at 7:41 PM No comments:

Well, it has been a long time since my last Blog post, I have been seriously derelict in my blogging duties.  Honestly life intervened and I had to make some choices and this was an area that I could let slide.  But I'm back now and will try to blog more often.

I recently retired from my day job, 35 years as a Public School Teacher, what an accomplishment!  It was always my plan to retire at 35 years and still have time to pursue my art career. A dream come true for sure.  I have updated my website and I'm delighted with how it turned out!!!  It is easy to navigate and so on point for current trends, the graphics are mine and were designed exclusively for me, we are planning to change out the graphics occasionally to reflect seasons or styles that I am trying to highlight.  You will need to update your bookmarked pages to see the new website, the old website is no longer available, it is still www.chartmandesigns.com just a quick change to your bookmarked pages.  I have so many great features on this site and I hope you will come on over and spend some time.  You will also need to re-register for my newsletter to continue receiving it, I have changed my carrier for my newsletter and Mail Chimp will not allow me to add my old address book without each and every one of you approving that change.  Please take the time to do that, I would love to be able to stay in contact with you.

I have a new pattern which is currently on my website called Monster Marionettes, sometimes designs just appear on the page and this is one of those designs.  I have been working on these quirky Zombie characters and decided to do a series.  I am currently working on the second in the series and I hope that you enjoy these zany characters as much as I do. 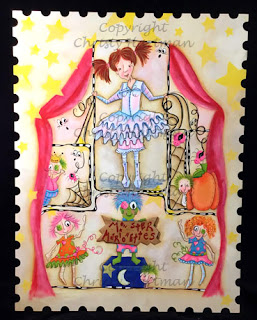 Posted by Christy Hartman at 9:15 AM No comments: 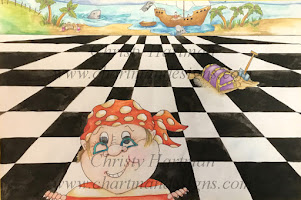 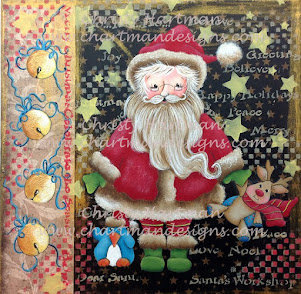 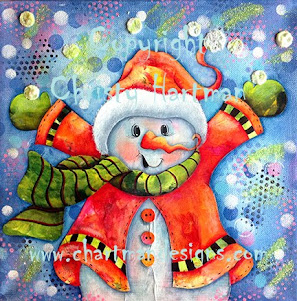